How can we help you?
Home News DIGIS3, a European benchmark in digital innovation in Castilla y León

DIGIS3 becomes a benchmark for digital innovation in Castilla y León, thanks to the approval of the proposal submitted on 22 February 2022, to become a European Digital Innovation Hub (EDIH).

This EDIH is composed by a group of entities that provide companies and public administration, in the territory of Castilla y León, with the information, services and facilities they need to successfully address their digital transformation processes.

This is excellent news for Castilla y León, given the relevance of having an EDIH in the region. On 16 June, the European Commission selected DIGIS3 as a candidate to join the European Network of Digital Innovation Hubs (DIH). 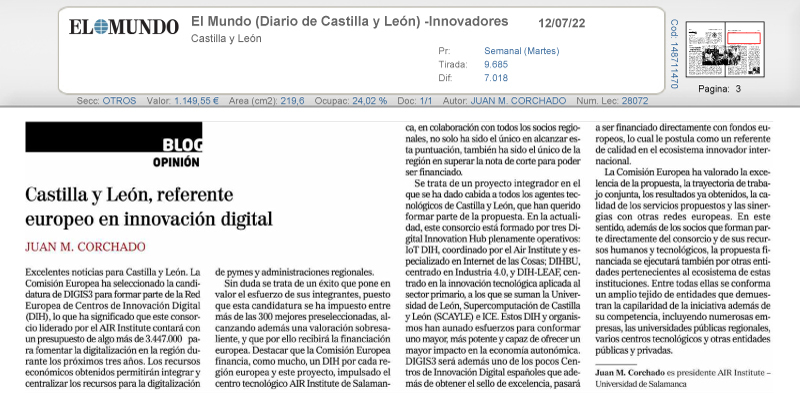 The consortium formed by the Institute for Business Competitiveness of Castilla y León (ICE), DIHBU, DIH-LEAF, Castilla y León Supercomputing Centre Foundation (SCAYLE) and the University of León (ULE) and it is led by AIR Institute. The consortium will have a budget of €3,447,000 to promote digitalisation in the region over the next three years. The obtained economic resources will allow for the integration and centralisation of techniques for the digital transformation of SMEs and public administrations.

Undoubtedly, this is a great success that highlights the efforts of its members, as this candidacy has been chosen from among more than 300 submissions. It has achieved an outstanding assessment and will therefore receive European funding. It should be noted that the European Commission funds a maximum of one DIH per European region, and this project was not the only one in the region to pass the cut-off mark for funding eligibility.

It is an integrated project in which all the technological agents of Castilla y León, who wanted to be part of the proposal, have been involved. Currently, this consortium is made up of three fully operational Digital Innovation Hubs: IoT DIH, coordinated by AIR Institute and specialised in the Internet of Things; DIHBU, focused on Industry 4.0 and DIH-LEAF focused on the primary sector, in addition to the University of León, the Supercomputing Centre of Castilla y León (SCAYLE) and ICE. These DIHs and public bodies have joined forces to form a larger, more powerful entity, capable of offering a greater impact on the regional economy.

DIGIS3 will be one of the few Spanish Digital Innovation Centres that, in addition to obtaining the seal of excellence, will be directly financed by European funds, which makes it a benchmark of quality in the international innovation ecosystem.

The European Commission has valued the excellence of the proposal, the trajectory of joint work, previous achievements , the quality of the proposed services and the synergies created with other European networks.

We share with you the latest article by Juan Manuel Corchado, president of the AIR Institute, leader and coordinator of the DIGIS3 consortium, in the newspaper El Mundo (Innovadores).