How can we help you?
Home News SCAYLE, a member of DIGIS3, organised the 3rd Annual RedCAYLE Technical Conference

The third annual RedCAYLE conference, organised by the Fundación Centro de Supercomputación de Castilla y León (SCAYLE), a member of DIGIS3, was held on 10 November at the San Isidoro Library on the Vegazana campus of the University of León.

RedCAYLE is the infrastructure that provides connectivity to all R&D&I centres in Castilla y León, including public and private universities, school internet access, technology centres, university hospitals and Singular Scientific and Technical Infrastructures (ICTS). It is managed by SCAYLE and has been co-financed by European funds (ERDF) and by the Regional Government of Castile and Leon. 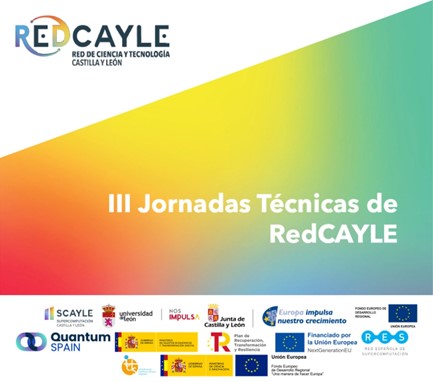 During the event, RedCAYLE's 3rd Annual Technical Conference, RedCAYLE status report was presented, as well as the plans to expand the capacity of the network, which expects to multiply its capacity by 10, thanks to the European funds for recovery and resilience. The new services developed by SCAYLE were also presented, such as the new features of the massive storage service for research data, OpenCAYLE, the distributed document registration services based on blockchain technologies, the fuzzification service for HPC-based programmes, as well as the projects related to quantum technologies that are being developed in Castile and Leon.

The event was opened by Ms. Blanca Ares González, General Director of Universities and Research of the Regional Ministry of Education of the Junta de Castilla y León, and by Mr. Juan Francisco García Marín, Rector of the University of León.